A woodpecker comes to eat at our suet feeder sometimes. Now there's a bird I can relate to. Not the pounding on trees part--What's that about?--but have you ever noticed a woodpecker's feet? They're very similar to parrot feet, with two toes facing front and two toes facing back. Woodpeckers are climbing birds, just like parrots. So you know they've gotta be nice birds. While they are lacking in the brilliant colors of a parrot, they make up for it with the pretty black and white patterns of their feathers. But all that pounding and tapping on trees? Why make a noise like that when you can squawk, I say.
Posted by Shadow at 11:04 AM 1 comment:

That dumb robin is at it again. I guess attacking its reflection in the picture window wasn't enough. (Read about that here.) Now it's also going after the car, especially the rear view mirrors. It also sometimes flies right at the kitchen window. You'd think it would've figured out by now that there's no other robin there. Believe me, you would never catch a parrot doing a silly thing like that. First of all, we parrots know the difference between the real and the merely reflective. Second of all, why chase away another member of your own species? After all, our survival depends on the flock. There's just no figuring out a robin.
Posted by Shadow at 12:49 PM 1 comment:

I just love a cozy evening at home. Don't you? I sit on my person's knee and preen my feathers. If I'm in the mood for conversation, I say "Pretty bird! Pretty bird!!" and make my chattering parrot noises. If my person is reading a book, I might take a few bites out of the pages. Then I go back to preening. It's a cozy way to pass the time. What about you? How do you like to spend an evening at home?
Posted by Shadow at 6:46 AM 1 comment: 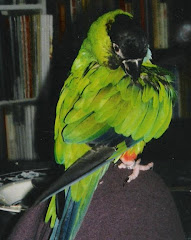